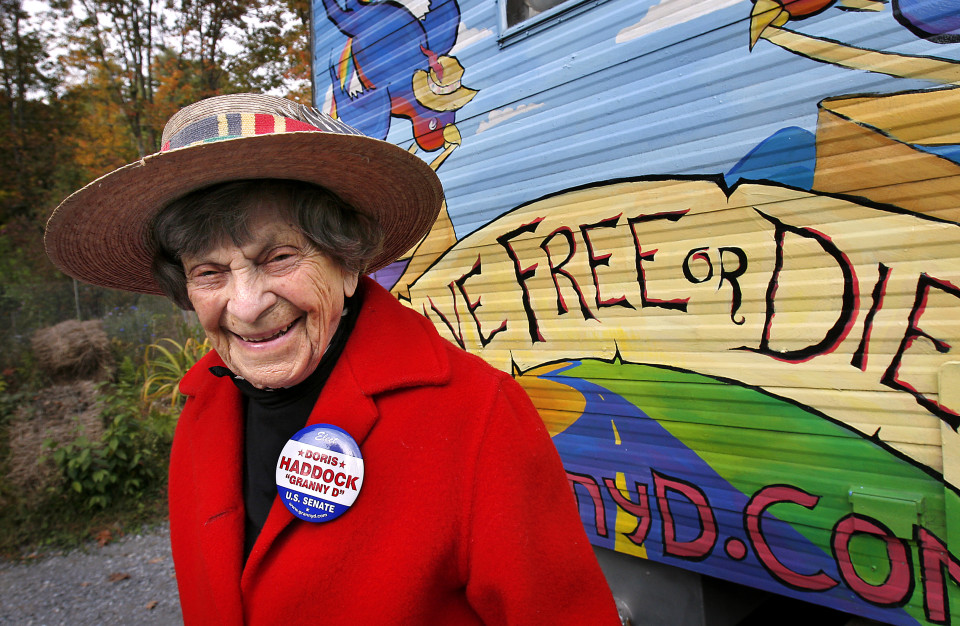 Doris “Granny D” Haddock is the nation’s oldest political newcomer. A former housewife and office assistant, Doris was happily retired for over twenty years–but when her husband died, she needed a reason to live. So at the age of 90, she laced up her sneakers and walked across America to rally against the influence of big money in elections. Her epic journey galvanized popular attention to a political system gone awry, but for Doris the walk was a warm up. Now 94 and still fed up with politics as usual, she jumps at an unexpected chance to run for U.S. Senate against incumbent Judd Gregg (an intellectual sparring partner of George W. Bush). With just four months until Election Day, this great–grandmother of sixteen faces a series of challenges that would be daunting for a candidate of any age. Doris and her motley crew of political aces and amateurs work against all odds and craft a feisty campaign that personifies her democratic ideals of a government of, by and for the people.

A tale of doggedness versus dollars, grit against greenbacks, RUN GRANNY RUN is an unlikely portrait of a remarkable activist and an exploration of our fragile democracy in the corporate age. 77 minutes, 2007, Digibeta

It is hard not to make a personal favorite out of RUN GRANNY RUN, the incredibly loveable tale of the 97–year–old woman who walked across the country and then ran for Congress, one of the most inspiring true stories of our time. In a sea of terribly constructed political documentaries, RUN GRANNY RUN is a breath of fresh air.
—indieWIRE

Packed full of insight into the US electoral system and a perfect tonic to any feeling of being ‘past it’, RUN GRANNY RUN is a joy to watch.
—Cinema For All

It’s genuinely thrilling to see someone who is willing to go to such lengths to stand up to the corruption of high stakes US politics, especially to see an elderly woman—a demographic that society largely sees as harmless, ineffectual and even comical—entering a world traditionally dominated by young and middle-aged men.
—Eye For Film

Poras’s grandly entertaining, genuinely feel–great Run Granny Run brings to life the heroic 2004 New Hampshire Senate campaign of 94–year–old Doris “Granny D” Haddock to unseat smug Bushite Judd Gregg. A SxSW bonus: I got to hang out with the charming, sprightly old lady, now 97, and she’s a swell hugger and kisser! Granny D for president! As she told me: “Though I lost, I helped turn New Hampshire from a red state to a blue one!”
—The Boston Phoenix

For the most part, I could care less about politically themed documentaries since I tend to think that they all have the same message and tend to preach to one side too much. This documentary, however, focused more on the spirit of one tough woman who truly refuses to let her age be an issue, and I enjoyed this documentary quite a bit…Doris may be ninety–four but she possesses a wit and humor that can rival that of any Hollywood screenwriter…an amazing look into the life of Doris Haddock…This film has even given me a new outlook on democracy in America…one of those great underdog stories. To see a woman of such advanced years still have a fighting spirit inspires a young person such as myself…a truly heartfelt film.
—Film Threat

Long before Carole Keeton Strayhorn proclaimed herself “One Tough Grandma,” Doris “Granny D” Haddock captured the nation’s attention in 1999 when she walked 3,200 miles from California to Washington, D.C., to support campaign finance reform. Granny D will make her big-screen debut next week at SXSW in the documentary Run Granny Run, which chronicles her 2004 bid for the New Hampshire seat in U.S. Senate against popular incumbent Republican Judd Gregg. Granny D will appear in person along with the film’s director, Marlo Poras, whose first documentary, MAI’S AMERICA, won the Audience Award for Best Documentary at SXSW in 2002.
—The Austin Chronicle

One of the better political docs that I’ve seen and another example of the difference that one person can make. (4 cats)
—Chlotrudis Mewsings

Finally—a documentary that sticks to the point. Timing in at a very reasonable 76 minutes, Run Granny Run was long enough to discuss the subject matter in full but without straying into superfluous, repetitive territory.
—The New Zealand Herald